Interested to learn more about itopia? Request a demo with a Solutions Expert.

Managed Microsoft AD provides a simplified Active Directory administration experience by eliminating the need to manage domain controllers or their associated services, such as AD DNS.

Based on feedback and internal testing, the Standard tier should provide adequate performance for RDS user profiles (FSLogix Profile Containers), even when accessed from a GCP region on the other side of the United States.  For larger deployments (greater than 100 users), the Premium tier may be a better option. Performance tiers can be modified from within the GCP console; for most customers, we recommend starting with a lower tier and scaling up as necessary.

There is no cost in itopia CAS for Managed Microsoft AD. For information on the GCP pricing for the managed service, refer to Google Cloud's documentation.

Managed Microsoft AD has some important distinctions from a traditional, full Active Directory implementation. These differences and limitations are important to consider when planning your CAS deployment: 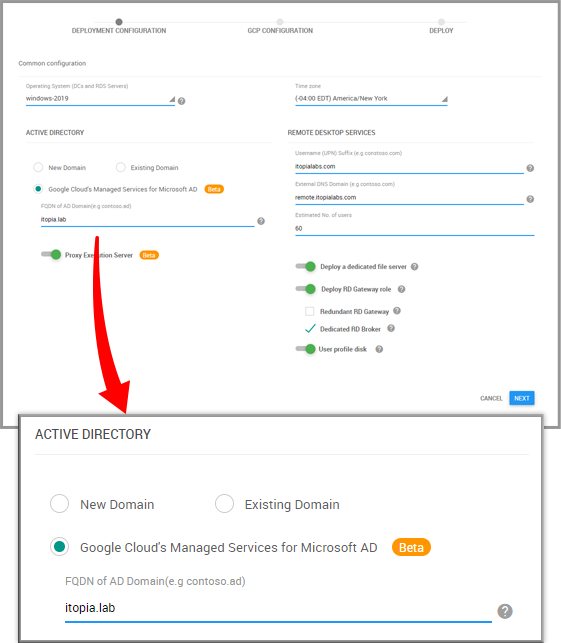 When your deployment is created, you'll notice the following differences from using a full Active Directory domain:

With these exceptions, CAS is configured identically to a full Active Directory deployment, and all CAS functionality is supported.

Interested in learning more about itopia's integration with Google Managed Service for Microsoft Active Directory? Schedule some time with a Solutions Expert here!

6 Ways Educators are Adapting to the Virtual Classroom